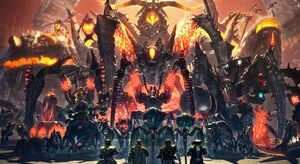 The Akrid are the indigenous life forms that inhabit E.D.N. III.

The Akrid are a race of reptilian insectoids indigenous to E.D.N. III. One of the many life-forms indigenous to the planet, the Akrid thrive in E.D.N. III's extreme cold due to Thermal Energy, a substance within their bodies which keeps them from freezing solid in the frigid temperatures. Early colonists encountered the Akrid almost upon arrival and quickly discovered that their weapons were either ineffective or completely useless against the creatures. It was for this reason that large, mechanized suits of armor known as Vital Suits were created during the second colonization attempt, which could withstand Akrid attacks and deliver enough firepower to kill even the largest species.

Akrid are extremophilic lifeforms, meaning that they can survive in extremely harsh environments with temperature extremes that would kill most Earthly species, such as the sub-zero wastelands of the polar regions, and some species can even live in molten magma. In addition to this, Akrid are amazingly adaptable and can rapidly mutate and evolve to accommodate changing conditions.

There are many species and varieties of Akrid, from the small, swarming of Sepia and Trilid to the massive, nigh-unstoppable Godon and Gorechryatis. They appear to be a hive- based, communal species, living within thermal energy- laden cave structures where they lay their eggs and create Genessa hives. It is unknown if they are sentient, but they appear to be coordinated in battle, indicating some sort of leadership structure or even a hive- mind.

Most Akrid share body plans of that resembles arthropods and reptiles on Earth, with segmented body parts, exoskeletons, multiple limbs, reptilian skin and claws and other characteristics, but there are few exceptions to this rule, evident in the Gordiant from LP2, who more amphibian/reptile-like than other Akrids, but also has six limbs like insects.

When E.D.N. III was warmed through terraforming efforts, many new forms of Akrid were found hibernating underneath the planet's surface, especially more Category- G Akrid. Unfortunately, the warming climate has made them even more aggressive, with matters complicated further by the discovery of an unimaginably large Akrid called the Over-G lying dormant in the planet's depths. According to the Ex-NEVEC soldiers, if the Over-G is allowed to transform into its final form, it could plunge E.D.N. III into a new ice age as a result of its massive consumption of Thermal Energy. NEVEC plans to use this to their advantage by taking all of that T-ENG released when it awakens. They will then abandon E.D.N. III and start colonization on another planet.

Community content is available under CC-BY-SA unless otherwise noted.
Advertisement